The Odisha Government on Wednesday imposed an additional 3 percent valued added tax (VAT) on Petrol and Diesel with immediate effect.

The decision that came into force with immediate effect increased the petrol price by Rs 1.49 a litre and diesel by Rs 1.30 a litre.

The state cabinet, which met on Wednesday, took a decision in this regard.

Briefing press after the meeting, chief secretary G C Pati said the cabinet has approved the proposal to increase the rate of VAT in petrol and diesel from 20 percent to 23 percent.

Additional chief secretary (Finance) R Balakrishnan said states like Madhya Pradesh and Rajasthan have also increased the VAT on petrol and diesel. The price of petrol has fallen by Rs 12.39 a litre within a span of five months, while that of diesel fell by Rs 9.17 a litre in the last three and half months. 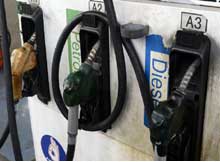 The state government expects to generate additional revenue of Rs 360 crore and Rs.90 crore from the hike in VAT for petrol and diesel respectively during the current fiscal, he said.