The Odisha government has decided to run all its office buildings on solar power to reduce consumption of hydro and thermal power for all its operations. In the first phase, all Government buildings located in Bhubaneswar and Cuttack would be powered by solar energy.

In 2013, the Odisha government had floated a company, Odisha Green Energy Development Corporation, a 100 per cent subsidiary of Odisha Hydro Power Corporation Limited. It had even signed an MoU with the International Finance Corporation, a World Bank subsidiary, to get the technical support for the project. However, due to the slow process in identifying the government buildings, the work on the project has been delayed for four years.

According to the survey plan, the Odisha government aims to provide solar power in 199 buildings in Cuttack and Bhubaneswar. An official said the project would be completed in next four months. The government is planning to generate at least 5 megawatt (MW) solar power from the project.

“With 5MW of power, the government buildings in Cuttack and Bhubaneswar will be able to cut down on their electricity expenses to the tune of Rs 4 crore. The government has given it clearance to go ahead with the project,” said a green body official.

At present, the twin cities are approximately consuming 7.07 millions unit per day, and the government buildings 9 millions unit per month. According to the budget, the hydro power body will invest nearly Rs 45 crore for the project.

An official said anyone could install the solar power unit by spending a small amount of money. 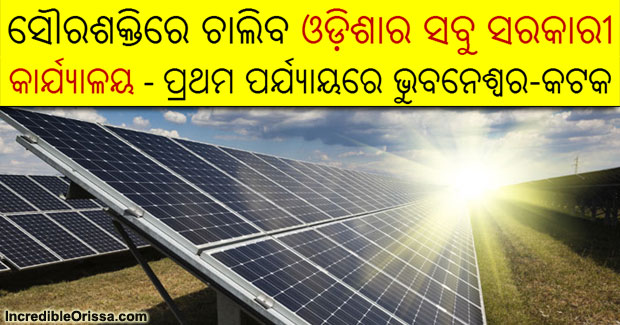