The Odisha government has landed in an embarrassing position after the revelation that it paid Rs 2 crore to the Daitapati servitors of Puri Jagannath temple as ‘compensation’ for the loss suffered by them due to the ban on devotees climbing the chariots during the annual Rath Yatra last year.

The said amount has been released by Sri Jagannath Temple Administration (SJTA) from its own fund and later it will be reimbursed through budgetary provisions of the State government.

It was revealed in a letter to Sri Jagannath Temple Administration (SJTA) dated 12th May, 2016, the state government has directed chief administrator of the shrine body to “accord approval of Rs 2 crore (Two Crore) only towards payment of compensation to Daitapati Nijog for prohibiting the devotees from climbing the chariots during the Rath Yatra, 2015.

The money was given to the Daitapatis for smooth functioning of Nabakalebara on instruction of Puri Shankaracharya Swami Nischalananda Saraswati and court. Puri Gajapati Maharaj Dibyasingha Deb was also in support of the compensation being provided to the Daitapatis, said by Daitapati Rama Krushna Das Mohapatra.

The revelation has evoked sharp criticism from all quarters. While scholars and experts on Jagannath cult have criticised the State government for appeasing the servitors, others including retired bureaucrats have condemned the act. 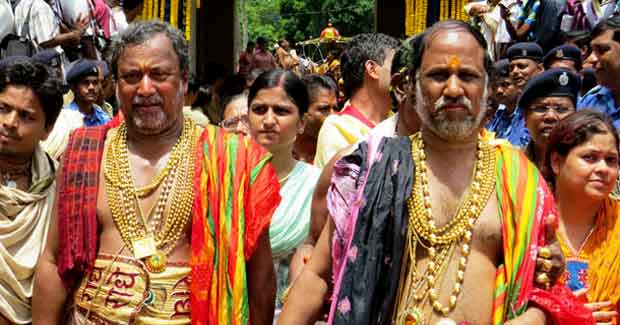