The Odisha government has decided to select two cities from among the five municipal corporations for the Smar City scheme launched by the Modi government.

A committee headed by chief secretary G C Pati would shortlist the two cities. The selected cities from the state have to participate in a city challenge competition along with 98 others to figure in the final list, official sources said.

While Bhubaneswar is likely to emerge as the first preference, the second city is yet to be identified. With the Odisha capital meeting almost 80 percent of the minimum requirements of the guidelines set by the Centre, the temple city is in all likelihood going to become the first smart city of the state.

Under the Smart City scheme, the Centre aims to develop 100 cities in three different phases and will provide Rs 100 crore annually for five years. The state government will also contribute an equal amount.

This year, 20 cities will be chosen out of the potential 100. Odisha is likely to get two smart cities, but not out of gratis. It has to undergo a rigorous two-stage competition – first at the state level and then at the national level. 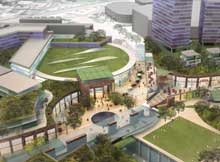 To discuss the guidelines of the scheme, the state housing and urban development department would hold a consulative workshop with mayors and commissioners of all five municipal corporations in Bhubaneswar on Friday.