An Odisha-born Indian Air Force pilot has made it to the next level of selection of astronauts for the ambitious Gaganyaan mission scheduled to take off in 2022.

Among the 25 test pilots for the initial selection process was Wing Commander Nikhil Rath from Bolangir, Odisha. Nikhil is the son of Ashok Rath, a renowned advocate, and leader of Bolangir district and Kusum Rath, a member of Mahila Commission.

“It is a matter of pride not only for me but also for Balangir as well as Odisha. He has been selected to undergo training for the space project. Our honourable Prime Minister Narendra Modi on August 15, 2018, had declared that three Air Force personnel will be finalised for ISRO’s space mission for which he had sanctioned Rs 10,000 crore. Nikhil qualified the first level of selection process for the project,” said Nikhil’s father Ashok Rath.

Nikhil completed his schooling from Kendriya Vidyalaya in 1998 and 12th from Delhi Public School in 2000. He was selected for National Defence Academy (NDA) while pursuing his graduation at Hindu College. In 2003, he joined the Indian Air Force (IAF).

All 25 shortlisted test pilots will undergo training in Russia for one year for country’s ambitious Gaganyaan mission. If the Air Force officer Rath gets selected into final list, he will be among three astronauts to go to the space for a seven-day mission flying an spacecraft up to an altitude of 300 to 400 km. 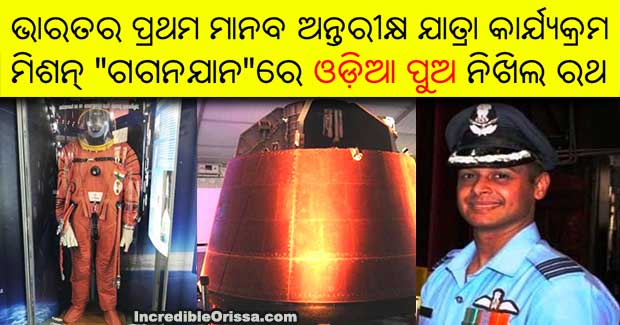