Odisha is all set to get an Indian Institute of Science Education and Research (IISER) after Finance minister Arun Jaitley on Saturday declared in his budget speech that two IISERs would be set up in Odisha along with Nagaland.

“The Centre wants every state to have central institutes. It will boost pursuit of science education and research in the eastern region,” said Union tribal affairs minister Jual Oram.

The state government welcomed the Centre’s initiative. “The BJD-led Odisha govt welcomes the Centre’s decision to set up an institution of science and educational research in Odisha,” the BJD tweeted.

At present, there are five IISERs run by the ministry of human resource development. These are located in Bhopal, Mohali, Pune, Kolkata and Thiruvanantapuram.

IISERs are autonomous institutions awarding their own masters and doctoral degrees. 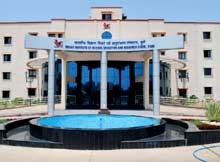