Dr Subhasmita Swain, a research scholar of SOA University in Odisha has developed a ‘chitosan-turmeric patch’- a medicinal bandage, which can be used to coagulate blood flow in accident victims and prevent road accident deaths.

“I used Chitosan- an extract from prawns and crabs which is an established and natural, cationic, biodegradable and biocompatible polymer with pure turmeric powder, which is a natural antiseptic and antibiotic. It was then processed and freeze-dried to obtain a porous patch which helps in checking bleeding from wounds instantaneously within a few minutes after application,” said 27-year-old Swain, a researcher in Bio-material Physics.

The patch, once commercially used, can be of great help particularly for accident victims, who bear profuse blood loss before being given medical treatment. The researcher recently received the Odisha Youth Innovation Award from the chief minister for her pioneering work.

Swain said, she has been working on the project for the last eight months and doing her research at the Centre of Excellence for Theoretical and Mathematical Sciences (CETMS) of SOA University. “I lost my cousin in a road accident a couple of years back due to heavy loss of blood in a road accident. Since then I was toying with the idea of developing something which can check blood loss especially for accident victims before they are taken to hospital,” she added.

ALSO READ: Odisha people to get cooking gas through pipe 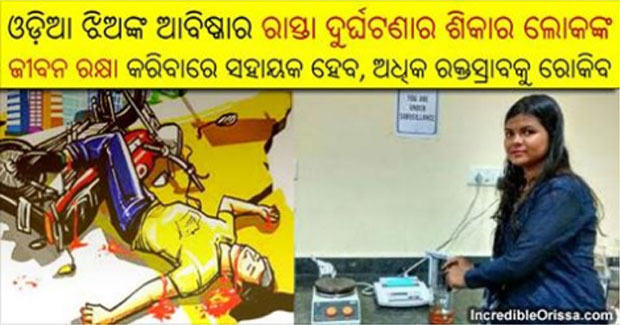