Now Aadhaar card is not mandatory to get LPG subsidy in your bank account under Direct Benefit Transfer of LPG (DBTL) scheme, which is set to be rolled out across all districts in Odisha on January 1, 2015.

The government has also decided to provide a three-month grace period till March 31, 2015 for households to receive subsidised cylinders directly from their dealers. Beyond this date, the LPG cylinders will be sold at market price.

The period – April 1, 2015 to June 30, 2015 — has been termed as the parking period by the government with respect to this transfer scheme. If a consumer enrolls at any time during this period, he will be entitled to receive the entire subsidy at a go, based on the number of cylinders he already bought from his dealer at non-subsidised rates. 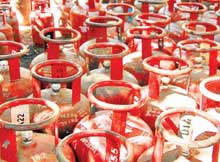 Nearly 4 lakh consumers having Aadhaar number have already been covered under the pilot project launched in nine districts of the state on June 1, 2013.