The people of Odisha will witness a partial lunar eclipse on 4 April 2015 (Saturday).

The eclipse will be visible in the region covering eastern Asia, Australia, North America, western half of South America, Antarctica, the Indian Ocean and the Pacific Ocean.

According to Subhendu Patnaik, deputy director, Pathani Samanta Planetarium, Bhubaneswar, the eclipse, as per the Indian Standard Time (IST) would begin at 2.31 PM. The maximum eclipse will be visible at 6.08 PM while the eclipse would end at 8.28 PM.

The total duration of the partial eclipse in the country would be 5 hours and 58 minutes while in Odisha it will be visible from around 6 PM to 7.15 PM.

According to a release issued by the Union Ministry of Earth Science, the places from where the beginning of the umbral phase is visible at the time of moonset are Argentina, western part of Brazil, eastern part of the USA and Canada.

The places from where the ending of umbral phase is visible at the time of moonrise are some parts of Pakistan, Kazakhstan, India and some parts of Russia. The totality of this eclipse will last for a very short duration. 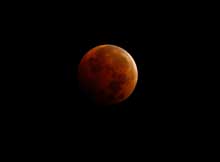 Patnaik said that this would be shortest duration of total lunar eclipse of this century which will be visible for only five minutes. He said elaborate arrangement has been made at the Pathani Samanta Planetarium where the people would witness the lunar eclipse through the telescope without paying any fee.