Even as Odisha is experiencing an intense heat wave with temperatures touching 45 degree Celsius in some places, a man took to cooking an egg on the road to demonstrate just how bad the situation is.

In a video released by ANI, an unidentified man in Titlagarh, Odisha, can be seen breaking an egg into a pan placed on the road and waiting until the heat cooks it – no stove, no oven needed. The omelette is ready to eat in under a minute. You can watch the video here.

The temperature in Titlagarh, Odisha is 45.5 degree Celsius! The locals are clearly having a tough time battling the heat.

In parts of Odisha, the mercury has already crossed 45 degree celsius, killing at least six people due to sunstroke. To demonstrate the fierceness of the heat, a man in Titlagarh, cooked an egg on the road, without fire. The footage, which was captured by ANI, shows him cracking an egg on to a pan and cooking it by holding it to the sun for a few seconds.

As temperatures soar over the subcontinent this summer, Indian cities are being hit by intense heatwaves, causing untold distress to people, even death in some cases. 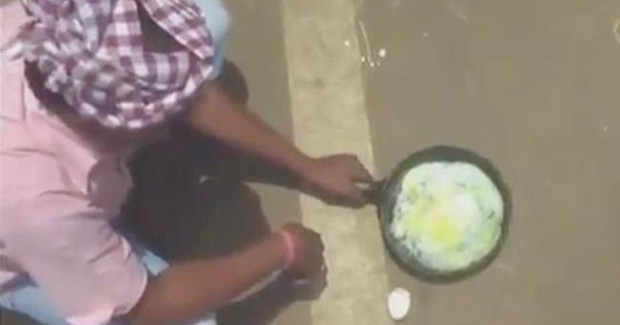