A man was fined Rs 42,500 for allowing his minor son to ride his motorcycle in Nuapokhari village of Bhandaripokhari block in Odisha’s Bhadrak district.

Narayan Behera, the owner of the two-wheeler was penalised after his son, Akash Behera, a college student, was triple riding with two friends on the pillion and that too on the wrong side of the road.

As per the challan, a penalty of Rs 500 imposed for general offence, Rs 5,000 fine for allowing person to drive vehicle without valid/proper driving licence, Rs 5,000 for driving vehicle without valid driving license, Rs 5,000 for driving against flow of traffic, Rs 1,000 for riding more than two persons in two-wheeler, Rs 1,000 for riding without helmets by driver and pillion and Rs 25,000 under offences by Juveniles.

Last month, a man in Pallahara area of Angul district was fined Rs 26,000 after a minor boy of his neighbourhood was caught by a joint team of MVI and traffic police while riding his bike without a helmet.

However, the State Transport Authority tweeted: “The vehicle owner/parent of minor boy driving vehicle have to pay penalty of 25 thousand, the boy won’t get DL till he is 25 years.” 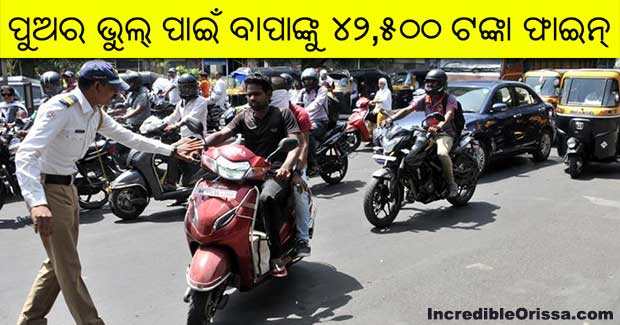