Contesting polls is his hobby and in spite of having lost 28 elections, K Shyambabu Subudhi, the 84-year-old resident of Odisha’s Berhampur has set his sights on contesting this year’s Lok Sabha polls as well.

Victory or defeat doesn’t matter to him, once dubbed by the BBC as the ‘world’s biggest election loser’. Undeterred by his past experiences, Subudhi has once again put up a benign challenge to the candidates for the upcoming Lok Sabha Elections.

This year, he filed his nomination from Aska and Berhampur Lok Sabha seats. He has contested nine times from these two Lok Sabha seats. Mr Subudhi will also contest the three vacant Rajya Sabha seats in the state, elections for which will be held on June 11.

The homoeopathy doctor by profession, Subudhi has been contesting elections since 1957 and has been consistently losing his deposit in every election he has contested so far.

ALSO READ: Now a movie on sensational murder of Graham Staines and sons 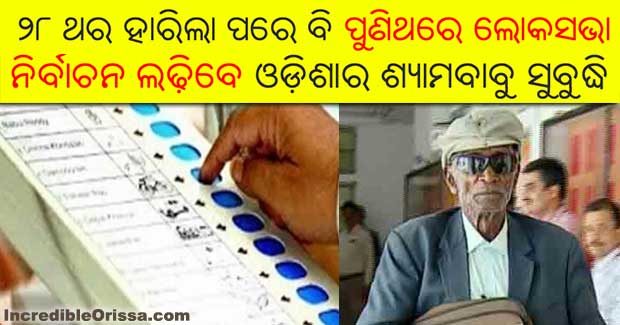