70-year-old Khyamasagar Bhoi of Odisha works silently to protect and promote Odia across the border in Odia speaking outlying tracts of Chhattisgarh.

A resident of Jharupada in Lakhanpur block, Bhoi’s family was one of the oustees who had sacrificed everything for Hirakud project. After being displaced, Bhois settled in the village and Khyamasagar earned a living by teaching harmonium in villages along the border. His skill took him across the border to play the musical instrument in mythological plays staged in Odia. A glimpse of the manuscript of one such musical dramas, based on mythology, left Bhoi thinking. Although the play was in Odia, manuscript was in Hindi.

Touched by the incident, Bhoi took it upon himself to spread Odia language in the neighbouring villages. In pursuit of his dream of preserving Odia language, Bhoi struggled to establish an Odia medium school in Chhattisgarh. Besides educating local youths, he roped in those interested from this side of the border. His efforts bore fruit in 2003 when he finally got help from Utkal Sammelani, which accepted his proposal and engaged teachers to teach Odia in these schools in the neighbouring State.

As on today, 192 teachers are teaching Odia in as many schools and Bhoi is a happy man but not contended. He also got ‘Barnabodh’ printed in Odia script and distributed it freely among the students studying in Odia schools.

Bhoi has established 132 “Bhagbat Tungis” in eight districts of Chhattisgarh where teachings of Bhagbat are rendered in Odia at the fall of dusk.To take his mission ahead, Bhoi has formed Bhagbat Tungi Prachar Samiti, a chapter of Utkal Sammelani and Balakrushna Das Music Foundation. The outfits are not only helping him promote Odia language but also Odissi dance among the diaspora. He has also established a library in Belaria of Chhattisgarh with books of Odia literature.

Bhoi said the residents of Odia-speaking outlying tracts are highly possessive about their mothertongue. They speak in pure Odia without taking the help of any English or Hindi words, he added.

ALSO READ: A world class data centre to be established in Odisha 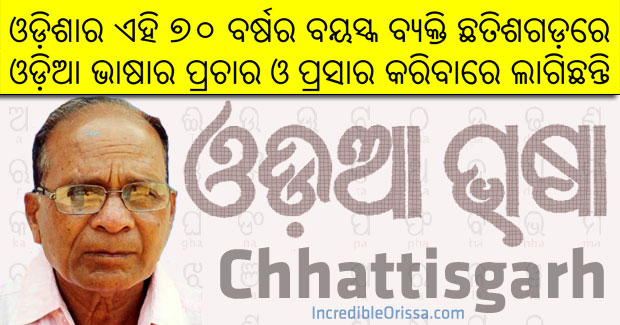