Bringing in a glimmer of hope in the day and age of caste and religious divide, an Odisha MLA performed the last rites of a poor woman, who was ostracised by her community, in Amnapali village of Jharsuguda district.

With the family member unable to perform the rituals, the MLA, Ramesh Patua, stepped forward to be the deceased’s pall-bearer, and helped perform the last rites along with his son and nephew on Saturday.

The deceased woman, who earned a living by begging, was staying with her brother-in-law. However, the latter was unable to perform the last rites of the woman on account of health issues.

“According to a practice in the village, if a person touches the body of someone from another caste, he is ostracised by his own community. Therefore, I sent my son and nephew to take the body to the burial ground and joined them to perform the last rites,” he said.

Along with the help of a group of men, the legislator lowered the body of the deceased woman into the ground, after which the men were seen filling the grave with sand.

It may be noted that Patua, who performed the last rites of the woman from Jharsuguda district, is a Biju Janata Dal (BJD) legislator from Rengali in Sambalpur district. 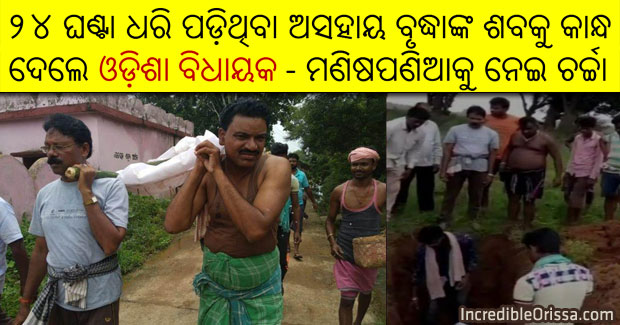