Scientists at the Zoological Survey of India in Odisha have discovered a new species of moray eel from the Bay of Bengal and named it Odishi, after the state in which it was first found, according to a study published in the journal Zootaxa.

A team of zoologists has found the Gymnothorax Odishi (locally known as Samudra Kochia) from Gopalpur beach in Ganjam district during a study in January. Moray eels (Muraenidae) are a cosmopolitan family of eels.

The Odishi moray was found in January this year when scientists accidentally caught 11 of them in a five-metre-deep net, which they had laid in Gopalpur coast area. After thorough examination, they categorized the Odishi moray as a brown short unpatterned eel because it had a uniform dark body color and a medium length of 42-70 cm. It differed from other species of short unpatterned eels in having a black spot behind the eye, more number of vertebrae and fins, white rims to jaw pores and larger eyes, the authors note in their paper.

“Before we found the Odishi eel, there was only a single species of brown short unpatterned eel – Gymnothorax mishrai known from India. With this new finding, the number of Indian species has now risen to two,” remarks Dr Anil Mohapatra, scientist at the Estuarine Biology Regional Centre of the Zoological Survey of India in Ganjam, Odisha, who is the lead author of the study.

He adds that Gopalpur coast, where the Odishi moray was discovered is an unpolluted area and this makes him hopeful that the new species faces minimal threat to existence in the near future. 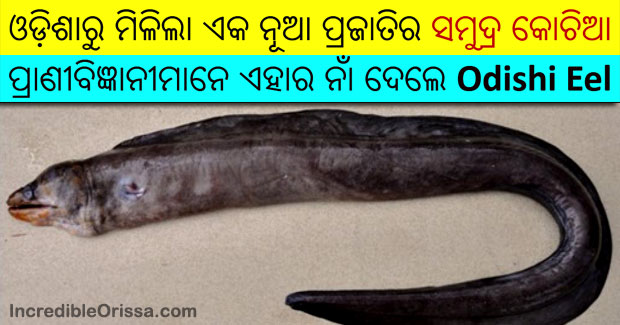