Local residents rescued a newborn girl, who had been buried alive in a compost dump in a field, at Shyamsundrapur village in Dharmasala area of Jajpur district.

The matter came to light around 9.10am when villagers noticed the feet of the infant moving above the ground. “We dug the pit and found the infant wrapped in a piece of cloth. As soon as we rescued the girl, she started crying,” said Alok Ranjan Rout, a youth who rescued the girl. “We immediately handed her over to an ASHA worker, who rushed her to the nearest Community Health Centre in an ambulance,” Rout said.

District Child Welfare Committee (CWC) today filed a complaint with Jenapur police station following which a case under section 307 and 317 of IPC was registered.

While the day-old girl is recuperating at the District Headquarters Hospital, the Collector Ranjan Kumar Das visited the healthcare facility to enquire about the baby’s health. The infant’s condition is stated to be stable.

On the other hand, the district administration has announced to adopt the baby and named her as Dharitri. The ekoisia (function held on the 21st day of the baby) will by held at famous Biraja temple on April 14.

Local MLA and Energy Minister Pranab Prakash Das welcomed the decision and stated that all necessary assistance will be extended to the child for her safe and secured future. 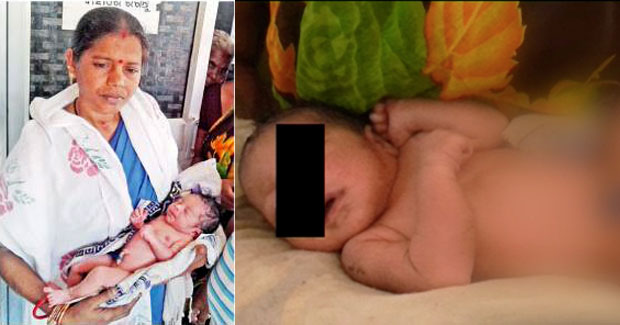