Odisha Parba is organised by Odia Samaj, New Delhi. Denizens from every nook and corner of Gujarat and nearby towns will witness the unique culture, heritage, tradition, cuisine and various other delights from beautiful coastal state like Odisha till 3rd September 2018 at this Odisha Parba.

After grand success of Odisha Parba organised for two consecutive years in 2017 and 2018 in New Delhi, the Odia Samaj has eyed Surat, one of the prominent business towns, to portray the rich cultural heritage, history and legacy of Odisha to the people of Gujarat.

The true essence of Odisha presented with a style never seen before. Magnificent shades of Odisha’s colourful celebration can be felt in each and every corner of handloom and handicraft gallery, food court and live stage.

A replica of the chariot used in the famous Puri Rath Yatra displayed just inside the entrance gate and intricate applique work and pattachitra designs of Odisha add more colours to the decoration. The event also features an exclusive stall for sale of ‘Jagannath Bhoga’.

There are around 15 stalls of handlooms and handicrafts showcasing various crafts and weavers from all corners of the State. The popular art and craft including Dhokra, Appliqué, Silver filigree, Pattachitra, paper mache, wood craft, shell craft and jute items are grand hit amongst both Odia and non-Odia residents of Surat.

Odisha’s traditional handloom sarees and dress materials from Kotpad, Barpali, Bargarh, Brahmapur and Subarnapur showcased at the event. Also, Khorda lungi and gamuchha on sale in the Odisha Parba in Surat.

ALSO READ: Longest bridge of Odisha to come up over Mahanadi river 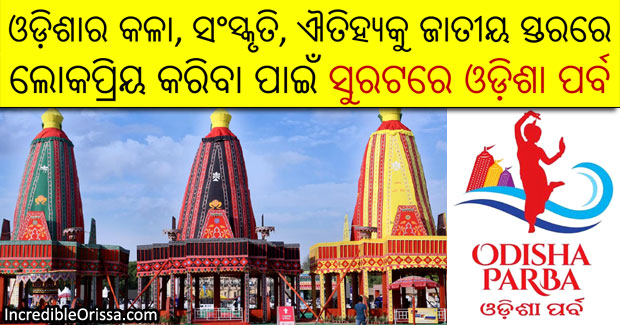