Odisha’s Md Jafar Iqbal and Sukhram Majhi, who were part of the Indian team that defeated Pakistan by nine wickets to win the recently concluded T20 Blind World Cup, received a rousing welcome as they arrived at the Bhubaneswar airport.

Jafar hit an unbeaten 54 in the last match against South Africa, steering the team to a comfortable win. In the match against England, Majhi top scored with an unbeaten 67, an innings packed with 12 hits to the boundaries.

Md Jafar Iqbal, who played his third World Cup, took on a responsible role this time. “As I had already been a part of the World Cup, I was considered a senior player and had to counsel the new entrants and guide them whenever required,” said Jafar.

In the final match, Jafar was the pick of Indian bowlers, grabbing two wickets. “After the match, our captain hugged me. It was a very special moment for me,” said Jafar, who became the captain of Odisha blind cricket team in 2010.

For debutant Majhi, the experience was a mix of excitement and apprehensions. “There was a pressure as this was the first time for me. But, playing at such a big level was encouraging. The biggest achievement is that the team won,” said the Plus Three student.

In the World Cup qualifier played in Bhubaneswar, Majhi’s 56 not out helped India win the match. Odia bowler Jafar had clinched two wickets, in one of which Majhi was involved. He stumped R.J. Gilmore off Jafar’s delivery.

“Their performance has been quiet well. We look forward to seeing more such players arising from Odisha. Their inclusion will also give a boost to differently-abled sport in the state,” said Cricket Association for the Visually Impaired (Odisha) secretary Sannyas Kumar Behera. 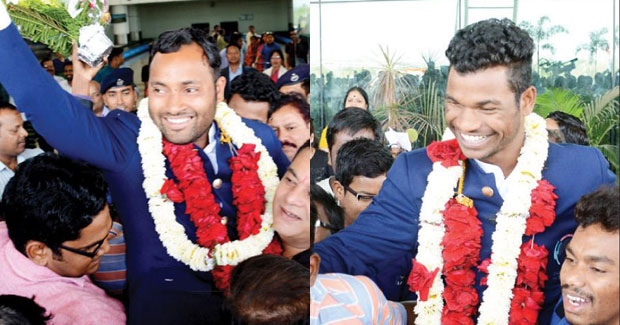