The Election Commission of India has revised poll expenses limit for candidates. The maximum limit of election expenses for a Lok Sabha constituency is Rs 70 lakh per candidate for all states, including Odisha, except Arunachal Pradesh, Goa and Sikkim.

The cap for Arunachal Pradesh, Goa and Sikkim is Rs 54 lakh. And, it is Rs 70 lakh for Delhi and Rs 54 lakh for other Union territories. For the assembly elections, the ceiling is between Rs 20 lakh and Rs 28 lakh.

In Odisha, the limit of expenses for an Assembly constituency is Rs 28 lakh per candidate, the commision said in a press release.

The commission has decided that an election expenditure either by/to candidate(s) or political parties exceeding Rs 10,000 in all the situations be incurred by crossed account payee cheque or draft or by RTGS/NEFT or any other electronic mode linked with bank account of the candidate opened for election purpose.

Such accounts will be uploaded on the website of the Commission for public viewing. 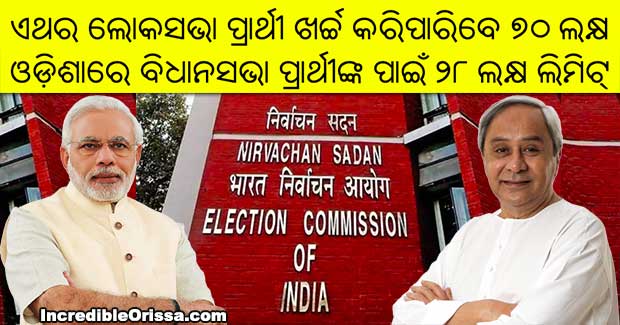