An officiating postmaster in a village of the Bhadrak district of Odisha was suspended after he was found to have not delivered more than a thousand letters and packages for close to 11 years, reported the Hindustan Times.

Postal delivery agent (postman) Jagannath Puhan, who was officiated as branch postmaster for more than a decade in the Odang branch post office of Bhadrak district, was suspended after preliminary inquiry found him “guilty of negligence and dereliction of duty”.

The undelivered mails were spotted by a few schoolchildren in an abandoned school building of Odhanga village from where the post office operated before it was shifted a few days ago.

As angry villagers milled around the soggy, torn and termite-infested letters looking for their mails, the postal department was quick to take action against Puhan.

“I have suspended him after it was found that he (Puhan) had committed gross dereliction of duty as well as breach of trust. Further disciplinary action, including dismissal, would be taken after inquiry,” said Sarbeswar Mishra, superintendent of Bhadrak postal circle.

Officials said they were still counting the number of letters Puhan had not delivered for over a decade. “We have managed to salvage over 1,500 letters in two days. But more than half of 6,000 letters that Puhan did not deliver have either turned soggy or eaten by termites and cannot be delivered at all,” said Mishra. 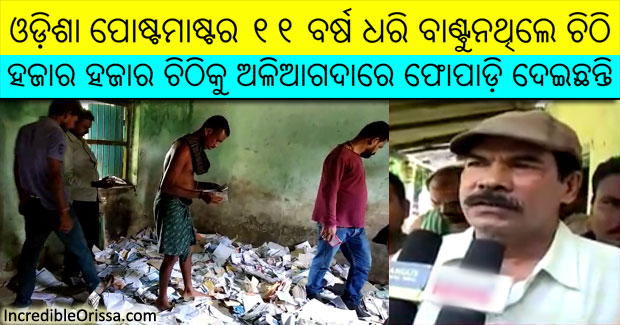