The East Coast Railway has created a record of sorts by building 6 limited height subways (LHS) or underpasses in record 4.5 hours, according to Divisional Railway Manager of Sambalpur.

More than 300 men, 12 cranes and 20 excavators were used to construct these subways in Bhawanipatna and Lanjigarh Road section in Kalahandi district in less than five hours on Thursday.

Sambalpur railway division of the East Coast Railway (ECoR) has constructed all these underpasses simultaneously in the railway section. “Launching of six LHSs in Sambalpur division is a first of its kind not only in the ECoR, but also in the entire Indian Railways,” said Jaydeep Gupta, divisional railway manager, Sambalpur on Friday.

In view of the building of six limited height subways (LHS), seven LC gates will be completely closed in Bhawanipatna-Lanjigarh Road Section of Kalahandi area of Odisha.

“This was done in spite of the tremendous challenges involved in launching six LHSs in one go and despite the unfavourable monsoon weather conditions…This has set up a new milestone in the history of Indian Railways,” the divisional railway manager said. 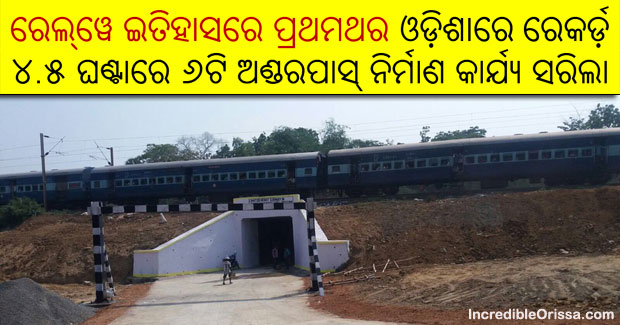