Andhra Pradesh became the first state to reserve jobs for local youths after the assembly passed the Bill, which reserves 75% jobs in industrial units, factories, joint ventures and projects set up under public-private partnership mode.

Now people are asking when Odisha government can formulate such a law for unemployed youths of the state? A large number of youths are going to other states for jobs.

According to the new law, if a company does not find the necessary skills in locals, then it will need to train them in association with the state government, the Times of India reported. This way, no company will be able to hide behind the excuse of not finding skilled local labourers.

The Bill, once enacted, will be applicable to all existing and upcoming units, joint ventures and projects taken up under the public-private partnership mode. The existing units have been given three years to comply.

Chief minister YS Jaganmohan Reddy said the move would help locals gain jobs by getting trained through skill development centres that the state would set up and provide industry with skilled labour, even as he tried to allay concerns over its impact on investment.

G Sambasiva Rao, president of the AP Chambers of Commerce and Industry Federation, said the move was a welcome one, and “most of the units employ locals only. However, there are certain sectors where it may be difficult to find locals for the jobs and the units will be forced to search outside. Further, while giving jobs to locals, the entire State of Andhra Pradesh, comprising 13 districts, should be treated as one unit. It is not possible to bring down the reservation to the district level.” 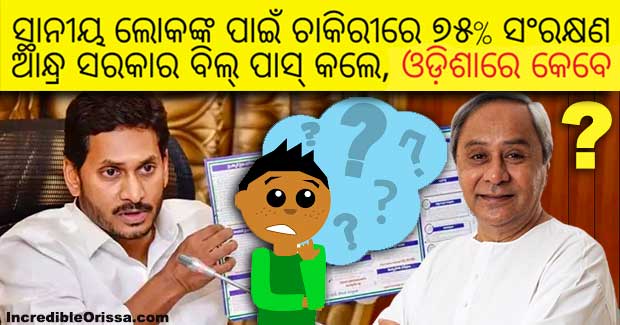 Home > Odia News > Andhra reserves 75% of jobs for local youths – When in Odisha?