A rickshawala’s son in Odisha, S. Dilesh Rao has proved that anything is possible by winning a bronze medal in International Aquatic meet in wind surfing in Tamil Nadu.

In this international water sports event held in Rameswaram beach in Tamil Nadu recently Rao, a resident of a slum near Buxi Bazar in Cuttack, has defeated the navy commando team to win a bronze medal.

A class 8 student in Christ Collegiate School in Cuttack, Dilesh has grown up in an environment of want and poverty. His father S. Ram Babu a rickshaw driver and mother S. Kammam a housewife.

Dilesh had taken training under international scuba diver Sabir Bux. In the state swimming competition in 2014, he won one gold and two silver medals. 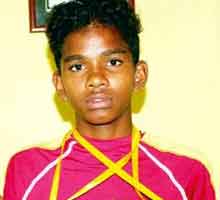 Meanwhile, world famous scuba diver Subir Bux has said that players are interested in wind surfing and stand up pedal boating in Odisha, but the State Olympic Association is not giving any emphasis into this matter.