A young boy from Odisha’s Balasore district has developed a robot, which can express feelings like humans, do household works and serve the elderly people.

Neelamadhaba Behera of Santaragadia village in Balasore district has developed the andro-humanoid robot, dubbed as ROBO-NEEL, in 10 months. Capable of multi-tasking, it can be used in hotels and restaurants besides for entertainment and education of children.

An andro-humanoid robot is an automation, which resembles a human both in appearance and behaviour and acts like a human. ROBO-NEEL has been developed so meticulously that it can express sadness, happiness and anger and communicate with people, the young scientist claimed.

“I have developed the technology in such a way that the robot can resemble anyone’s face. We can use the robot in place of our dead relatives. It can also help elderly people by serving them and solving their problems,” said 18-year-old Neelamadhaba, who is now preparing for entrance examinations to take admission in technical course.

The 5.3-foot robot has a lot of sensors which make it an advanced and smart one. It has controllers like human brain, sensors like human eye, nose and ear and motorised systems like human muscles and joints.

The ‘machine human’ receives outside commands through its sensors and then its controller commands automatically to act as per the requirement. Its sound recognising sensor detects words, sounds and responds to it accordingly. Its face, made of silicon, can express feelings like a human being. 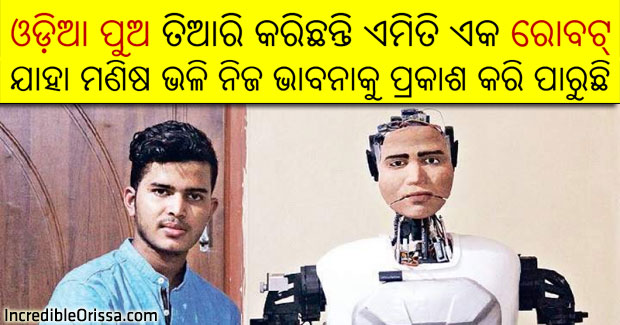