Eminent RTI activist of Odisha – Pradip Pradhan has been nominated as national advisor to National Human Rights Commission (NHRC) on right to Food. Pradhan is one among 13 members of the reconstituted Core Advisory Group of NHRC.

He is also National Working Committee Member of NCPRI (National Campaign for People’s Right to Information).

The National Human Rights Commission (NHRC) of India is an autonomous public body, responsible for the protection and promotion of human rights, defined by the Act as “rights relating to life, liberty, equality and dignity of the individual guaranteed by the Constitution or embodied in the International Covenants”. 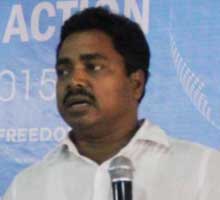 His nomination to advisory body of NHRC will no doubt help NHRC to address food security issues effectively in the country in general and Odisha in particular. I hope that he, as Member of Advisory Group of NHRC will definitely make significant contribution in the field of Right to food of the poor and deprived section of the society.