A 33-year-old schoolteacher in Odisha refused dowry and instead received 1,001 saplings as wedding gift.

Sarojkanta Biswal who teaches science at Jagannath Vidyapith in Choudakulata village of Kendrapara surprised his in-laws when he declined to take any form of dowry for marrying Rashmirekha Paital, also a schoolteacher.

“I had promised myself that I would never take dowry. But when my father-in-law insisted that he has to give dowry, I asked him to give me 1001 saplings of fruit-bearing trees,” said Biswal.

The green demand of Biswal, who has been propagating planting of trees for a long time, was accepted by his in-laws. On June 21, the day before marriage, Biswal’s father-in-law sent 1001 saplings, which the science teacher carried in a small van the next day during the marriage procession.

The young schoolteacher distributed about 700 saplings of mango and bakul tree among people of his village Balabhadrapur amidst blowing of conch. To keep the marriage free of sound and air pollution, he also avoided any DJ music or bursting of firecrackers during the procession.

WATCH: Over 100 cobra babies found inside house in Odisha’s Bhadrak 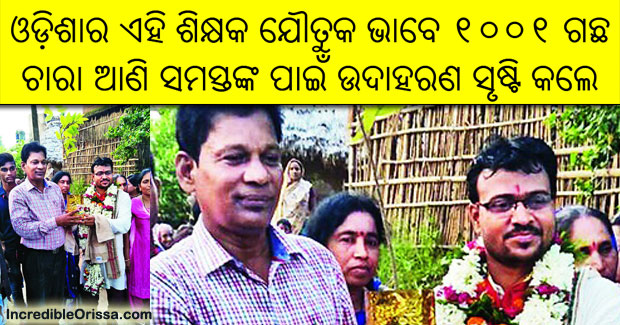