The Odisha Government explored the possibilities of establishing ‘sister state relationship’ with Brazil. This was discussed at a high-level meeting between Chief Secretary Aditya Prasad Padhi and Indian Ambassador to Brazil Ashok Kumar Das at the State Secretariat.

Das made a presentation on the potential and opportunities in Brazil. The possible areas of collaboration can be yoga, ayurveda, Buddhist circuit, handloom and handicrafts, eco-tourism, medical-tourism, agri-business, gems and jewellery and heritage-tourism.

Establishment of sister state relationship will strengthen cultural, economic, technological and intellectual inter-exchanges between Odisha and Brazil, official sources said after the meeting.

Both Odisha and Brazil can also participate in each other’s international trade fairs and investment meets. Both can benefit in mutual promotion of Startups, ethnic cultural exchanges and sports.

Industries Secretary Sanjeeb Chopra was nominated as the State Government’s nodal officer to carry forward the dialogue for future collaborations between Odisha and Brazil. Ambassador Das assured all kinds of help from the Embassy side for giving a concrete shape to all possible areas of cooperation and mutual exchanges. 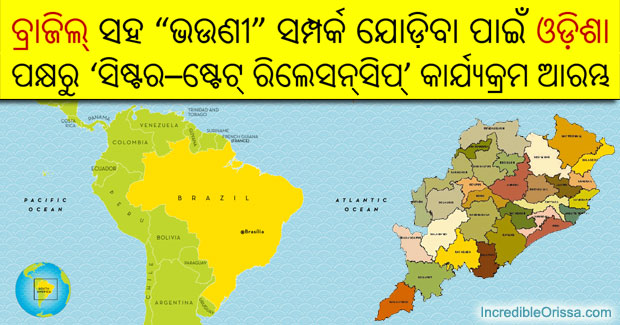