Chandan Nayak, an 11-year-old football player of the Sabar Sahi slum in Bhubaneswar, got a lifetime opportunity to train in Germany’s prestigious club FC Bayern Munich. He is among the top five Indian junior footballers who got the chance to train at Germany for two months.

Interestingly, Chandan is unaware that the club that he is going to play for is the second most sought after football club of Europe that boasts of world famous players like Andreas Möller, Arjen Robben, Franck Henry Pierre Ribéry and Jérôme Agyenim Boateng. Bayren Munich has won the DFB-Pokal cup and also emerged champion in Bundesliga (Germany) competition.

Bajaj Allianz Life Insurance, had launched the seventh season of the Junior Football Camp, the much-awaited annual talent hunt for aspiring school-level footballers. This camp provides young, talented footballers in India an opportunity to prove their mettle. The scouting camp held in Mumbai, Kolkata, Pune, Patna, Bhubaneswar, Guwahati and Kochi. As many as 160 players got selected for the final camp held at Pune.

A great fan of Lionel Messi, Chandan loves the No 10 Argentinian jersey made famous by the Barcelona superstar. A master in passing and dribbling, Chandan aims to bring accolades for the State.

His coach Jayadev Mohapatra is on Cloud Nine after this stupendous achievement by his ward. “It is a matter of pride that Chandan has been selected to play for Bayern Munich. He was the youngest, only 11-year old, among others who had come to the all India level competition. Coming from a poor background, his journey to abroad is really a proud movement for the state,” Mohapatra said.

Class sixth student of Capital High School Chandan proved that poverty can not be a hurdles to prove your quality. Chandan Nayak is the most discipline and dedicated player, said his coach JB Mohapatra.

Odisha first state to include transgenders in Govt recruitment process 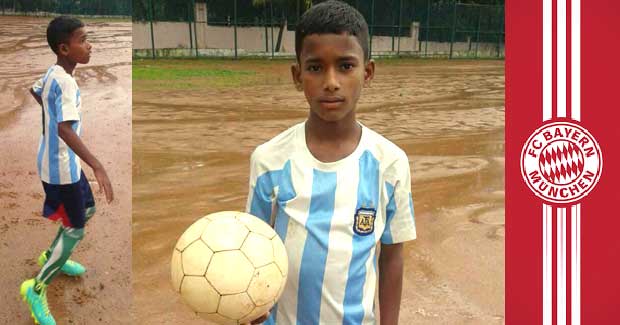