It will strengthen sporting prowess and capability of the sportspersons across the country. The agreements were signed in a special event named ‘Sports in Odisha,’ which was organized at the Kalinga Stadium.

The centres to be set up include athletics by the Reliance Industries Group, football and swimming by the JSW Group, badminton by the Dalmia Bharat Group, weightlifting by the Ahluwalia Group, shooting by the Aditya Birla Group and hockey by the Tata Group. Besides, the state government also signed an MoU with Xavier-Emlyon Business School to set up a high performance centre for sports management. Similarly Rungta Mines Ltd and Abhinav Futuristic Pvt Ltd will set up an advanced medical rehabilitation centre in Bhubaneswar.

“The signing of these MoUs has created a long-lasting partnership, which will result in producing sportspersons of world standards. But, this partnership is more than just giving grants and funds, it will focus on extending the outreach of every sport in India,” said CM Naveen Patnaik.

Former India cricket team captain Anil Kumble, Indian shuttler and coach Pullela Gopichand and shooter Gagan Narang were also present during the event. “The Odisha government is promoting sports in a great way. I believe Odisha has a lot of talent and initiatives like these will only help,” said Gopichand. 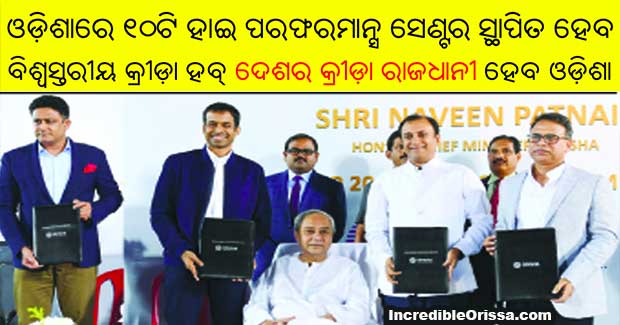