Designed and developed by Bhubaneswar-based startup In Thinks Gadgets Pvt Ltd, a venture of In Thinks Group of Companies, the power bank automatically gets recharged using solar panel and electro-ionisation technology.

The company has used solar panel imported from South Korea in power bank. The efficiency of the panel has been increased through electro-ionisation to convert any light into power, said MD of the Startup Susant Pattnaik.

The portable power bank can be connected to any Smartphone. One needs to push a single button for activation and fast charging. The power bank comes in two variants — Sol-Ka and Sol-Ka Pro — at Rs 3,500 and Rs 7,500 respectively. The Sol-Ka is slimmer, while Sol-Ka Pro comes with a SIM and a memory card of 64 GB.

The Startup owned by Susant Pattnaik had also launched a LED bulb with an in-built inverter. The 25-year-old entrepreneur is planning to launch smart watch in upcoming days. The smartwatch will work like a health band and its features will provide safety to women. Currently, the project is under testing. 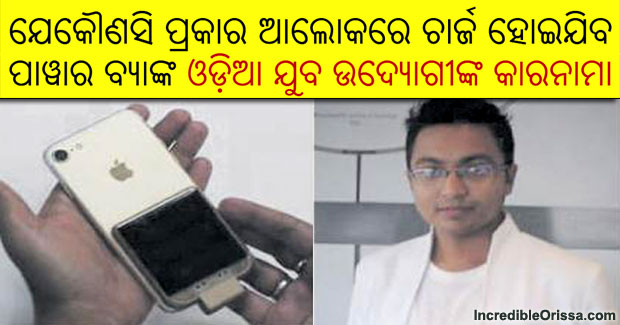