Chidananda Arpita from Odisha’s Balasore district was adjudged the best student in a university of Jammu and Kashmir. She has also been felicitated by President of India Ramnath Kovind.

Chidananda Arpita, daughter of poet Abhay Das and school teacher Manjulata Bal, won three medals. She was adjudged the best student of the university, the other two medals went to her as the topper in the Bachelor of Architecture (B.Arch) and for achieving distinction.

She was given citations and a cash prize of Rs 60,000. While Rs 50,000 was given for being the best student of the university, Rs 10,000 cash prize was awarded for passing the course with distinction. She had topped in all the 10 semester during the five-year course.

Arpita was a student of architecture department of Mata Vaishnodevi University at Kakrial in Jammu and Kashmir. 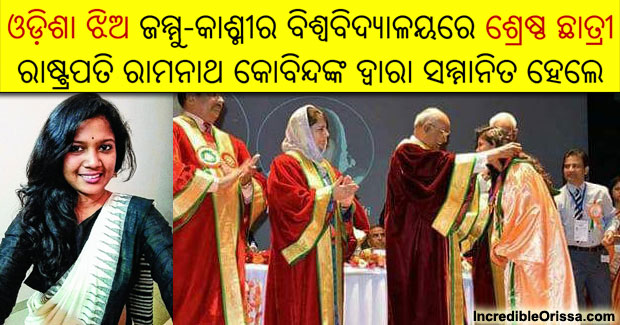