Two students of Bhadrak Institute of Engineering and Technology (BIET) at Barapada in Odisha’s Bhadrak district have come up with a two-wheeler (scooty) that runs entirely on solar power.

The innovation, the students claimed, will enable the automobile manufacturers to roll out eco-friendly solar vehicles and thereby help the country save a lot of money otherwise spent on fossil fuel.

Prakash Chandra Ghadei and Rajkumar Upadhyay, 4th year students of mechanical stream in Barpada engineering college, took a stock moped and modified it, equipping it with four 12-volt batteries which are charged by three solar panels that are attached to the rear of the bike.

The bike after the modifications weighs 140 kg. Once fully charged, the bike carrying two persons can travel a distance of 110 km at a maximum speed of 30 kmph under ideal riding conditions.

A striking feature of the prototype two-wheeler is that the solar panel will recharge the batteries automatically if it is parked directly under the sun. One can also choose to top up the batteries by plugging them into the power grid.

“Our bike is different from the existing electric bikes in the market as it can be charged through solar power, which is a renewable source. All electric bikes need to be recharged with electricity, which in turn is derived from non-renewable sources such as coal. At a time when carbon emissions are drastically on the rise leading to climate change, there is a need for mass production of such,” said Prakash and Rajkumar.

The project cost the students Rs 90,000. “As its rear wheel is fitted with a variation motor (400rpm), the vehicle will not slow down even if its batteries start losing charge. Besides, the position of the rear solar panel can also be adjusted and the bike comes with anti-theft sensors,” the students said.

The students thanked their teachers A. Chaina, Ajit Behera, Asutosh Mohanty and Kishore Kumar Nayak for guiding them with the project.

ALSO READ: First blind woman of Odisha to get PhD 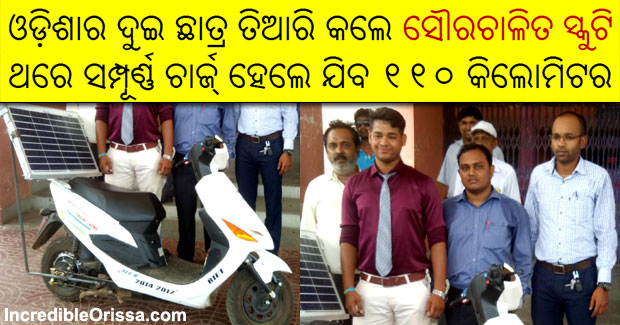