The colourful and beautifully designed tableau of Odisha caught the eye of everyone at the Republic Day Parade 2017 as it passed through the Rajpath in New Delhi on Thursday.

The tableau depicts Dola Yatra, one of the most celebrated festivals of Odisha which is observed during the Hindu month of Falguna. 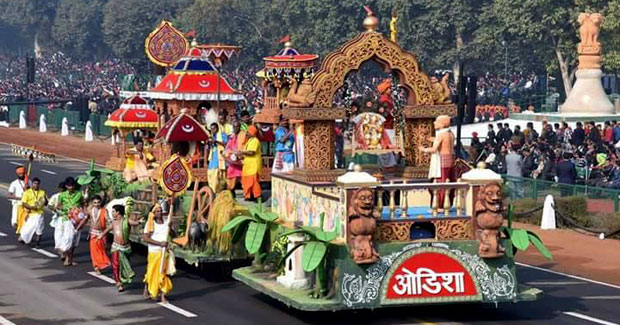 The design of the tableau was prepared by a team of artists including Gajendra Sahu, Chhatrapati Biswal and Baladeba Maharatha in association with senior designer of Information and Public Relations Department Pradyumna Dash.

A 16-member selection committee from the Ministry of Defence approved Odisha’s proposal which was sponsored by the Information and Public Relations Department.

This Republic Day Parade saw tableaux from 17 States and six Ministries of the Union Government. These tableaux not only showcased a wide range of themes basing on the country’s rich cultural heritage but also highlight the socio-economic development of the nation in key areas like IT, women empowerment and environment protection.