The beautifully designed tableau of Odisha showing the Rukuna Ratha Yatra of Lord Lingaraj and the Lingaraj Temple caught the eye of everyone at the Republic Day Parade 2020 as it passed through the Rajpath in New Delhi.

As the tableau started rolling down the Rajpath visitors welcomed it with grand applause took a glimpse of the rich cultural heritage of the State. Designed by noted sculptor Gajendra Sahu the tableau featured a miniature of Lingaraj temple at the rear and Rukuna Rath at the front.

In a beautiful addition to the replicas, Odissi artists performed on the tableau on a song based on Lord Shiva’s ‘Tandav’. The choreography for the same had been done by Sunil Bala.

It is important to note here that Odisha’s tableau got a selection after a gap of two years. In 2017, famous Dola Jatra, one of the most celebrated festivals of our state which is observed during the Hindu month of Phalguna.

The tableaus of 16 states and union territories have been shortlisted for participation. These tableaux not only showcase a wide range of themes basing on the country’s rich cultural heritage but also highlight the socio-economic development of the nation in key areas like IT, women empowerment and environment protection. 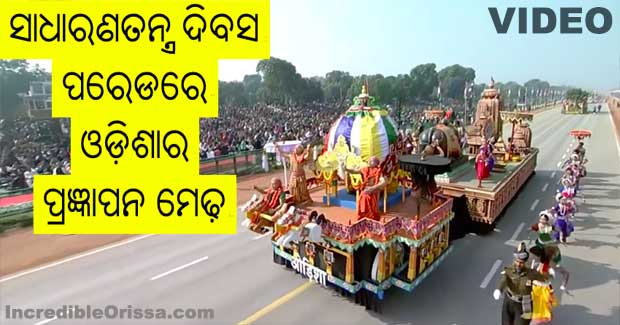