The son of a tea-seller, Srikant Sahu topped the motor vehicle mechanic category at the 51st annual All India Skill Competition held in May in Kanpur, which included a written test, a practical exam and an interview.

The result, declared this month, entitles Srikant to a cash award of Rs 50,000 and that certificate.

Srikant Sahu from Nabrangpur district was hailed by Union Petroleum and Natural Gas Minister Dharmendra Pradhan on his Bhubaneswar visit on Sunday.

“Srikant scored 398 marks and topped the competition, and ITI Berhampur was declared as the best in that trade for 2014-15. Following his success, companies will flock to us for recruitment. He is our biggest advertisement,” said Rajat Kumar Panigrahi, principal of ITI Berhampur.

“If one pursues their dream with strong willpower and hard work then the obstacles will automatically disappear”, says Srikant Sahu. 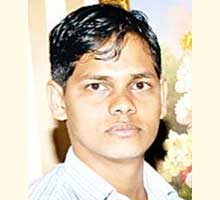 Srikant desire for a government job might soon be a reality as he has already cleared the written test and interview in Indian Ordnance Factory, Jabalpur, and is waiting for police verification.