The Odisha government has set a target of attracting new investments to the tune of Rs 20,000 crore in the tourism sector by 2021.

Similarly, the state government has set a target of 23.84 million tourist arrivals and the creation of 2,500 star-category hotel rooms by 2021.

The state aims to create 200,000 jobs, set up five convention centres and establish direct flight connectivity to five international destinations. It also aims to create a land bank of 2,000 acres to facilitate investors to get land for tourism projects.

“According to Economic Survey done by the state government, the state has the potential to attract Rs 20,000 crore new investment in the tourism sector. We are making concerted efforts to achieve the target by 2021”, said Nitin Bhanudas Jawale, director of Odisha tourism department.

“Odisha has much more tourism potential compared to its neighbouring states to develop its tourist spots and pilgrimage places to showcase before the world. But, the state has the lowest number of star category of hotel rooms. We are sure that with the new tourism policy of the Odisha government announced in 2016, we can add about 5000 hotel rooms in the next three years”, said J K Mohanty, chairman, Hotel and Restaurant Association of Odisha and chairman and managing director of city-based Swosti Group.

More than 12 million tourists visit Odisha every year and the number is growing by 9-10% annually. WATCH: Konark light and sound show 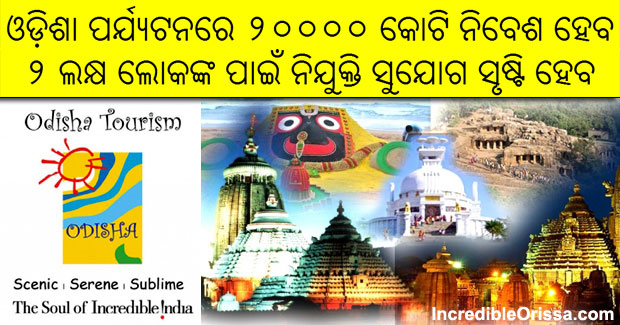