A village in Odisha’s Kendrapara district has houses which have no doors at all.

Sialia in Rajakanika block, around 150 km from Bhubaneswar, is perhaps the only village of its kind. The ‘doorless’ village, whose inhabitants are mostly farmers and smalltime traders, has for long baffled casual visitors as well as the authorities with its ‘open’ houses.

Surprisingly, Sialia village has not recorded any theft or burglary for a long time, according to the local police. Though thefts take place in all the adjoining villages, not a single case has been reported from Sialia.

The villagers attribute their complacency to the presence of Goddess Kharakhia Thakurani, the presiding deity of Sialia. The idol sits at one end of the village under a giant banyan tree. Like the village houses, the shrine, too, does not have a door.

Nobody dares to go against tradition. A villager had put up a door in his house some years ago. After a few months, the house caught fire and the man had to rebuild his home without doors.

While the absence of doors also means lack of privacy, especially for the women, the villagers are not complaining. Of late, some villagers have taken to hanging a piece of cloth at the entrance to ensure privacy.

In the 21st century, a village sans doors due to religious belief is a curious phenomenon that, perhaps, only India can offer. Each year, this unique doorless village attracts many curious people to Sialia. 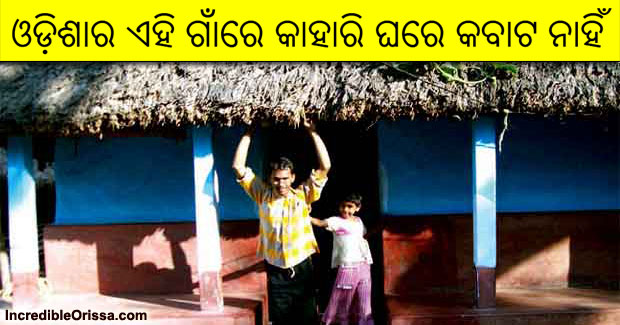