Meet a die-hard fan of Virat Kohli from Odisha, who has mortgaged his mother’s jewellery to watch him bat in Mohali. Is it passion or something else, Nikash Kanhar doesn’t hesitate to admit that he is mad about Kohli.

With his body painted in tri-color and Virat and his jersey number 18 scribbled on it, Kanhar cheers for the Indian team as well as the Indian Test captain.

The 33-year-old bus conductor from Odisha’s Kandhamal district didn’t even think once before taking a loan on his mother’s jewellery to get his airline tickets booked for Chandigarh, to watch the third Test between India and England.

He agrees that it isn’t very sane to do that but also admits that is how it is. “Woh toh hai (that’s how it is),” It would never be easy for someone to convince their family to mortgage gold just for the sake of watching a cricket match rather a cricketer in action. “There was an argument,” he said.

“But I convinced my mother. All she wants is a photo of Virat and I in the same frame. I don’t know how soon that is likely to happen. Where returning the money is concerned, dekh lenge. Maa hi toh hai (Let’s see how I can do it. It is mother’s money after all).”

His father who is a vegetable vendor wasn’t pleased either but Kanhar ignored and wasn’t bothered by it, “Woh bolte hain, par sunta kaun hai (he keeps cribbing, but who listens).” 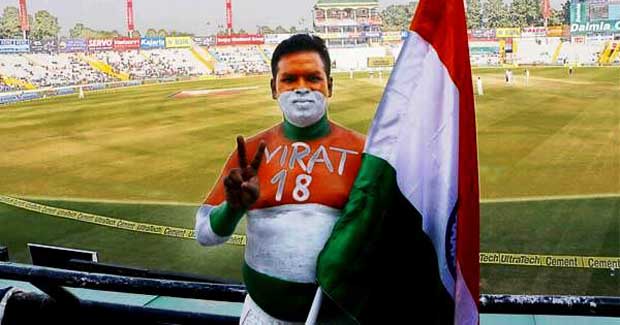