A 20-year-old woman gave birth to four babies at once in Odisha’s Mayurbhanj district, reported Odisha Sun Times and Sambad.

Now the mother and her 4 babies are stated to be in normal condition following delivery. The four babies weigh around 680 gm, 580 gm, 730 gm and 900 gm respectively.

According to reports, the woman Jhunu Rani Dhal, wife of Uttam Dhal of Shingada village under Shulipada block in Mayurbhanj district was seven months pregnant.

Jhunu was admitted to the Pandit Raghunath Murmu Medical College & Hospital after she felt severe pain in her stomach. She gave birth to triplets (all are girls) at around 1.18 pm on Tuesday and one single child, which is a boy.

Shockingly, the delivery was normal. Till the last report came, the condition of Jhunu was normal and her babies were undergoing treatment in Sick Newborn Care Unit (SNCU). 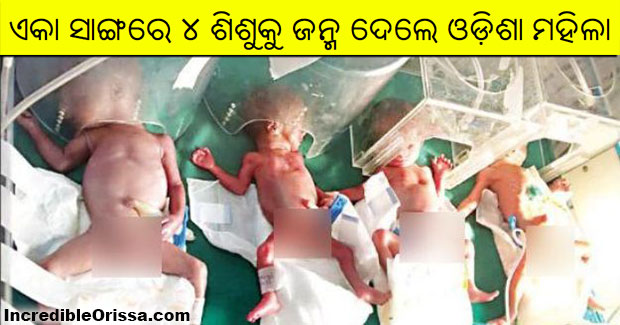