While the BJP’s landslide victory in the Uttar Pradesh Assembly elections has become a talking point across the country, residents of Odisha’s Balasore are happy that one of their daughters Leena Tiwari has scored a victory in the Hindi heartland.

A native of Motiganj, Dr Leena Tiwari from Apna Dal (S) has defeated Shraddha Yadav of Samajwadi Party by 11,350 votes. Leena has bagged 58,804 votes against Yadav’s 47,454 votes. Apna Dal (S), an ally of the BJP, has won nine seats leaving the Congress and Samajwadi Party surprised.

About 60 years ago, Leena’s father Jagdish Prasad Tiwari settled in Motiganj area in Balasore and ran a small business. Leena, born in 1972, did her schooling from Radhakrushna Hindi Vidyalaya before pursuing her higher studies from Kuntala Kumari Sabat Mahavidyalaya.

Leena later married Pawan Kumar Tiwary, a businessman from Jounpur of Uttar Pradesh. After her marriage, she did her PhD and was associated with a number of cultural outfits there. She finally got a ticket from regional party Apna Dal (S) and was elected from Mariyahu constituency.

“It was her inclination for social service that compelled her to join politics. Fondly known as Odia Madam, she had gained immense support of the locals for her services which helped her to sail through,” her brother added. 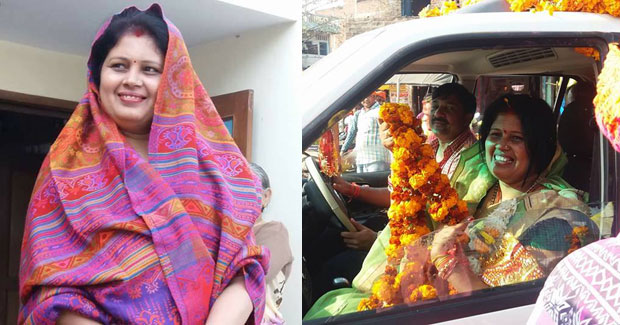