In an unusual incident, a tribal youth of Odisha’s Sundargarh district got his wife remarried to her lover on learning about their relationship just four days after his marriage.

A native of Pamara, 28-year-old Basudeb Tappo had married a 24-year-old woman from Jharsuguda’s Debdihi village on March 4. The wedding had taken place according to the rituals of the farmer community to which Tappo belonged and had no legal sanction.

On Thursday, the newly married woman’s lover Sushil Pradhan (21) accompanied by his two friends reached her in-law’s house and identified himself as the woman’s distant brother. The other two youths invited Toppo to go for a drink while Pradhan stayed back. On return, Toppo found his wife and Pradhan in compromising position.

Enraged over the incident, the villagers tied Pradhan and beat him up till the woman admitted their relationship. She claimed that despite her unwillingness, her family forcibly got her married to Toppo.

Seeing the turn of events and the circumstances that led to them, Tappo suggested that his wife marry her lover. He then contacted his wife’s elder brother and sister and the parents of her lover to convince them of the plan.

On Saturday, they all came to Pamara for the wedding which also saw hundreds of bemused guests. This wedding too was solemnised according to the community’s traditions — without legal papers and with the blessings of the members of the community. 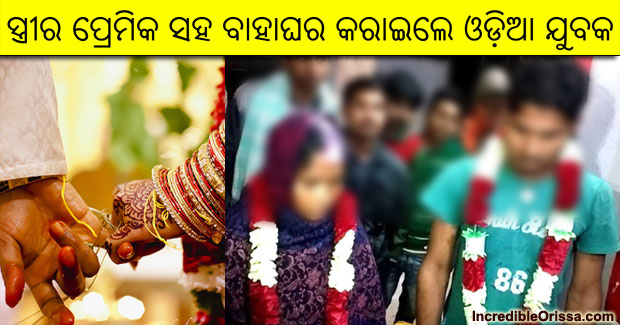