Two youths from Odisha registered their names in the Limca Book of Records for longest cycling in the State. Dressed in Olly mascot, the duo had covered 800 km within seven days by bicycle visiting seven districts.

The two were Soumya Ranjan Biswal (21) of Jahania area under Astarang block and Dilip Kumar Biswal (20) from Sakhigopal area in Puri district.

With an aim to create awareness among coastal inhabitants for the safety of endangered sea turtle olive ridley, Soumya and Dilip had started their journey bicycles on March 7 this year from Konark. They reached Kendrapara on March 14 via Puri, Chilika, Gopalpur, Bhubaneswar, Cuttack and Jagatsinghpur.

During seven days of their mission, the two had visited around 50 coastal villages and 35 schools for public awareness.

The Limca Book of World has acknowledged their achievement. They will be presented the certificate in February 2019. Akshay Kumar thanks his Odia fans known as Odisha Akkians. 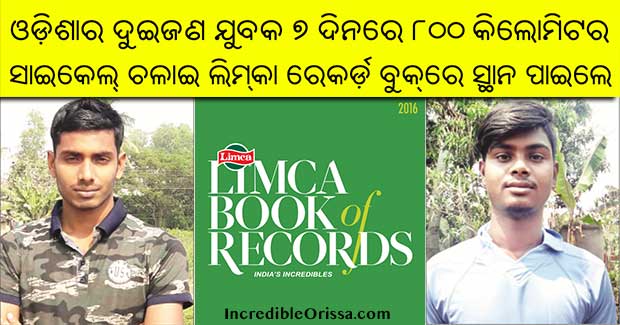