Around 500 Odissi artistes from Odisha and the neighbouring states of Chhattisgarh, Jharkhand, Bengal and Andhra Pradesh will perform at the 14th edition of the annual Odissi Sangeet Mahotsav at Bhubaneswar’s Jayadev Bhavan today.

The four-day festival is being organised by the Sangeet Sudhakar Balakrushna Dash Foundation, named after the legendary singer-musician, and is being supported by the ministry of culture, Eastern Zonal Cultural Centre, Calcutta, state department of tourism and culture and some corporate houses.

The 500 artistes, from individuals to institutions, were sent open invitations to perform here. They will perform non-stop from 10am to 10pm at this major festival. Conceptualised as the annual union of all Odissi musicians from all parts of the world.

The festival showcases all genres of Odissi music that includes the Chhanda, Champu and Jaga Akhada Sangeet. 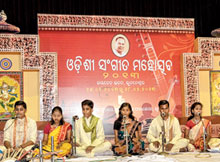 Among the performing artistes would be the famous Shyamamani Devi, Arjun Charan Samal and established names such as Sangeeta Gosain, Mitali Chinara, Bharati Jena, Dhiraj Kumar Mohapatra and Sangeeta Panda.