Designed by students of the Idea Club of the institution, the machine has been built at a cost of Rs 1500 only. Iron strips, iron rods, bearings, bicycle chains, steel plates, and pieces of wood – all of which had been discarded – were used to design machine. 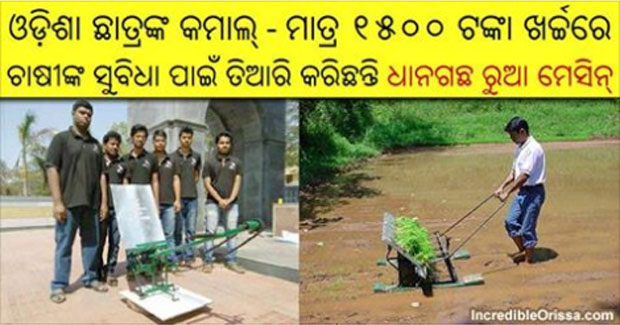 Transplanting is the technique of moving the plant from one location to another. At first, the farmers sow rice in a nursery, and after 15 to 20 days it grows up to the size of 2 to 3 inches, after which they are transplanted to the fields. The farmers plant the saplings in a bunch row-wise. But this is a very labor-intensive job. Farmers plant the saplings bending down which causes various ailments like back pain, spondylitis. It is very costly for a farmer to hire labour to such jobs.

“It took us three months to design it. We spent only Rs 1500 for the project. However, if more machines are produced, the production cost will reduce remarkably,: said the Idea Club’s secretary, Bodhisattwa Sanghapriya.

The market cost of such machines is between Rs 40,000 and Rs 50,000. “Marginal farmers cannot afford it. Because of their financial constraints, they depend on the traditional way of paddy transplantation which is time-consuming,” said Bodhisattwa.