Four famous personalities from Odisha were today conferred with the prestigious Padma Shri award at Rashtrapati Bhavan in New Delhi.

“I am extremely happy and express gratitude to Union government for chosing me for bestowing me with Padma Shri. I feel honoured myself and I dedicate this award to the actors and artists of Odisha. I pray for their prosperity and development of cinema,” Sadhu Meher said.

Notably, Meher has worked with internationally acclaimed directors Satyajit Ray, Shyam Benegal, Buddhadeb Dasgupta, Mrinal Sen, and Tapan Sinha among others. He has earned a name for himself with his acting in Hindi and Odia movies. He has played significant roles in Bhuvan Shome, Ankur and Mrigaya. He bagged National Film Award for Best Actor for Ankur.

Jitendra Haripal (or Jitendria Haripal), a singer, is most popularly known for his voice in the famous and super hit Rangabati Song in Sambalpuri language of Odisha. He sang this duet song with his female co-singer Krishna Patel. He has sung over 1000 songs and regarded as a top exponent of Kosli language (or Sambalpuri) song.

For Aruna Mohanty, the award is a recognition of her contribution towards propagating Odissi across the country and abroad. “I am extremely happy that the country has recognised my efforts towards promoting and propagating this ancient dance form,” said the dancer, who dedicated the award to Guru Gangadhar Pradhan.

“I have maintained diligence and honesty throughout my career spanning for over 30 years. I was expecting recognition for which I am thankful to Union government and people of Odisha. It’s a big encouragement for me and I am very happy,” Dr Mukut Minz said. It may be mentioned here that Dr Minz had performed renal transplant surgery on External Affairs Minister Sushma Swaraj. 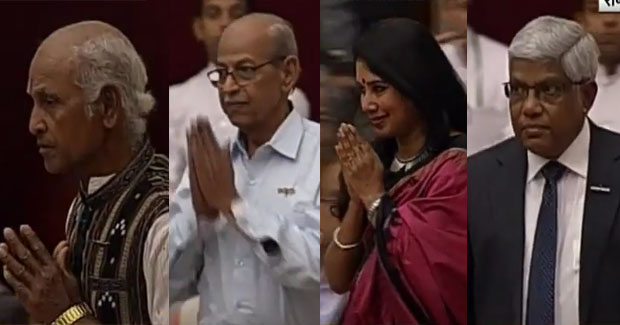