Here Papu shared his political ambitions, why he was defeated in 2014 Assembly election, his upcoming film as a producer Ame Ta Toka Sandha Marka and other facts of his life. 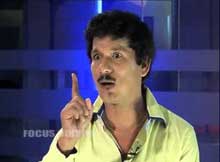