In a move that seeks to empower elderly parents, the Bombay High Court in a recent judgement has ruled that elderly parents can take back property gifted to a son if he ill-treats them.

A division bench of Justices Ranjit More and Anuja Prabhudesai, while hearing a petition filed by a son challenging a tribunal’s order that cancelled a gift deed given by his father, ruled in the latter’s favour as he was harassed by his son.

The senior citizen’s first wife died in 2014. Last year, when he wanted to remarry, his son and daughter-in-law requested that a share of the Andheri flat should be transferred to them. To buy peace in the family, he transferred 50% share in the flat to his son in May 2014. Subsequently, they started insulting the elderly man’s second wife. The father and his second wife were forced to leave the Andheri flat. The father then approached the maintenance tribunal, which cancelled the gift deed. The son challenged the tribunal’s order, but the HC dismissed the petition.

The court highlighted that the gift deed was given by the father on the request of his son. Hence, it was implied that the son and daughter-in-law would take care of the father and his second wife after half of the share in the flat was transferred in the son’s name, the judges mentioned.

Although the son and daughter-in-law were ready to look after the father, they were unwilling to take care of his second wife, said the judges, and in such circumstances there was no error in the tribunal’s order to cancel the gift deed, the judges ruled. 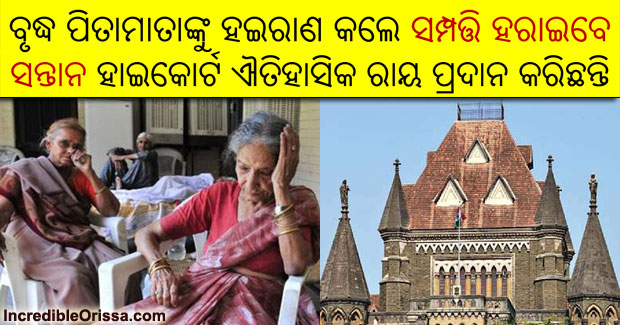 Improve your male potency and fight back the premature ejaculation. With the help of tadalis-reviews.com you will have your healthy sexual life back in no time. Order it with Priligy online and forget about premature ejaculation once and for all.
Copyright © 2022 Incredible Orissa.
error: Content is protected !!
<!-- Cached page generated by WP-Super-Cache on