The servitors of Jagannath temple in Puri threatened to boycott the temple administration if it implemented Justice B.K. Patra Commission’s recommendations.

The servitors have also threatened to lock the doors of the 12th century temple, if any attempt is made to truncate the rights that they enjoy for generations.

Former vice-chancellor of Utkal University of Culture Narendra Mishra on Saturday suggested construction of permanent chariots for Rath Yatra instead of making them every year.

Rath Yatra or Chariot Festival involves moving deities lord Jagannath, Balabhadra & devi Subhadra on three chariots. The festival originated in Puri, Odisha. “Ratha” in Odia means chariot and “Yatra” means journey. The festival thus refers to the annual journey of the divinity in the form of idols to the ‘Mausima Deula’ (aunt’s place).

Every year three new chariots are made by using timbers of trees like ‘Fashi’, ‘Dhaura’ etc. and around 14000 cub. Ft. woods are used for the same. The required woods are procured from Duspalla forest by cutting many trees.

For stopping the cutting of many trees every year, the duly instituted Justice B.K. Patra Commission recommended to built permanent chariots for the same which is going to be accepted by the Government of Odisha after discussions.

CHECK: No Helmet, No Petrol in Odisha’s Cuttack city from New Year 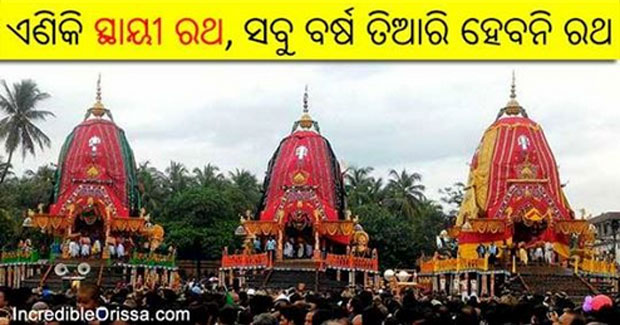