Police registered a case against a group of unruly spectators, who hurled water bottles onto Barabati stadium during T20 match between India and South Africa on Monday.

The Commissionerate Police has lodged a case at cantonment police station in Cuttack over the incident. Police registered the case under sections of 143 (unlawful assembly), 294 (use of obscene words) and 353 (assault or criminal force to deter public servant from discharge of duty) of IPC.

Police sources said they would examine the footages of CCTVs installed inside the stadium and find out the law breakers for throwing water bottles onto the field causing embarrassment to the state.

READ: Ritesh Agarwal from Rayagada, Odisha is the founder of OYO Rooms

It coincided with Odisha Cricket Association (OCA) submitting a report to the Board of Control for Cricket in India (BCCI), which pulled up the association and sought an explanation as to why spectators were allowed to carry water bottles into the stadium, in breach of International Cricket Council (ICC) guidelines.

Even as former cricketers like Sunil Gavaskar and Michael Vaughan recommended temporary ban on Barabati, OCA is hopeful of placating the BCCI. 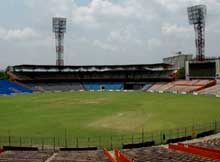 Odisha Chief Minister Naveen Patnaik on Tuesday ordered a probe into the unruly crowd behaviour during India-South Africa T20 International at Barabati Stadium causing embarrassing to the state government as well as the cricket fans.