The President Pranab Mukherjee inaugurated a Convention of Non-Resident Odias (NROs), Prabasi Odia Conclave, 2017 organized by the Odisha Forum and the Government of Odisha, in New Delhi.

Praising the glorious legacy of Odia people, President Pranab Mukherjee on Friday said it inspires the rest of the country. Mukherjee said Odisha was not only the first state to get statehood on the basis of language in 1936, it first embraced the process of integration of princely states into the Indian union.

“While reflecting on prabasi Odias, my mind goes back to deep recesses of history of the state. The earliest examples of prabasi Odias represent fine examples of entrepreneurship and business acumen which are now needed and indeed applied, across India to register higher growth and development,” he said.

President Pranab Mukherjee touched upon facts that are not commonly known about Odisha’s legendary leaders Utkal Gaurab Madhusudan Das and Utkalmani Gopabandhu Das. Mukherjee referred to Mahatma Gandhi’s article My Odisha Tour and said: “He had praised the conviction and wrote that he would surely make India free if he could gather a hundred Gopabandhus in India.”

Gopabandhu Das survived on poor diet for the sake of swaraj, he said. “Indeed the ethos of swaraj in all its glory has been guiding this pearl of east which has contributed in many ways to building India,” Mukherjee said.

President reminded the legendary Utkal Gaurab Madhusudan Das, who spent considerable part of his life outside Odisha spearheading a movement to start the first ever step in the form of historic Utkal Sammilani in 1903 to unify Odisha as a separate state. It was also he who established the first educational institution for women which became a college in 1913 much ahead of the first women’s university in Bombay set up in 1916, a loft endeavour at the time and a worthy endeavour for all times.

Chief minister Naveen Patnaik and Union oil minister Dharmendra Pradhan also addressed the gathering on the occasion. The conclave organized to discuss different aspects of Odisha would continue till January 8.

ALSO READ: Puri Beach Carnival to be organised for the first time 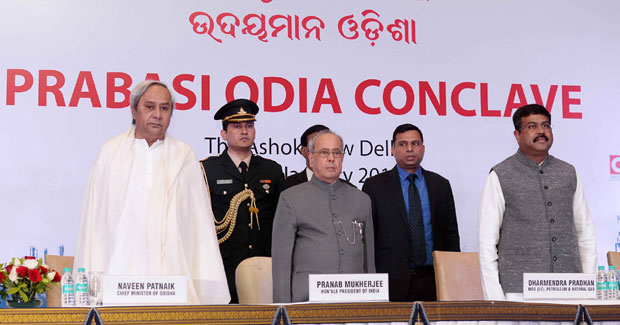